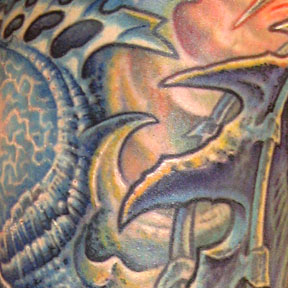 Tattooing is an art form that I was drawn naturally toward. I can't say for sure why the appeal was so incredibly strong when I was first introduced to skin art; no doubt the rebellion aspect had a lot to do with it, although to those whom have collected a lot of work, there is an understanding that the appeal is indeed hard to explain because it works on a very primal level. Humans have been marking themselves for thousands of years, and in some ways tattooing can be seen as one of the original great traditions, rather than a crass act of rebellion. For me, though, I believe a lot of what drew me into the tattoo world was a recognition of its untapped potential, of the fact that this was an art form whose possibilities had barely been touched upon, almost as if its brimming potential was a secret hidden even from many of those doing it for a living every day.

At that moment, a handful of young artists, mostly coming from the punk rock scene, were standing around the bookshelves in their local record stores, staring aghast at Ed Hardy's Tattootime books. This was the real deal, we all decided: Tattooing would not only make the grand rebellious statement that we all loved but also was flooded with promise, an unparalleled creative frontier.

Over 24 years later, the tattoo medium has indeed lived up to every bit of its potential and more. Tattoo art has become a powerful underground transformative force in our culture, and somehow crosses over and swaps DNA with animation, graffiti, music, technology, science, psychedelic culture. and a whole spectrum of fine art worlds. It's one of the most exciting places for a creative person to be.

For me, all these myriad influences come together into a particular style of abstract tattooing. I take as my starting point the flow, form and dimension of the body part I'll be working on, and then aim to transform it into something entirely different: A fusion of biology and technology; a multilayered system of interconnected parts. I use all my tricks to make it as realistic, as visually maximized, as I am able.

Often people on the street will ask about abstract biomechanical tattoos. They've never seen anything like it, yet there's an immediate, visceral appeal. They'll ask what it's about, but there usually isn't any story attached; the purpose of this kind of work is to decorate the body, same as primitive tribal islander tattoos from centuries back. It serves this primal, irrational purpose that purely decorative body art serves. I don't really know if there's any better explanation than that, to be honest. I just try to make every tattoo look as nice as I can make it.


Note: All tattoo designs shown in these galleries are custom pieces designed for each client. DO NOT COPY ANY OF THESE TATTOOS. Not only can that ruin your reputation as a tattooist, but I'd also like to point out that the first cases of lawsuits over tattoo design infringement are starting to go to court. If a client brings you a photo of someone else's tattoo as a request, explain these facts to them, and then encourage them to allow you to create a custom design to their liking.